Bintris is a mobile game developed in Go!

Support me by buying this game on Google PlayStore ðŸ’¸: https://play.google.com/store/apps/details?id=go.lang.bintris

Or you can of course build it from source yourself (see instructions below ðŸª›). 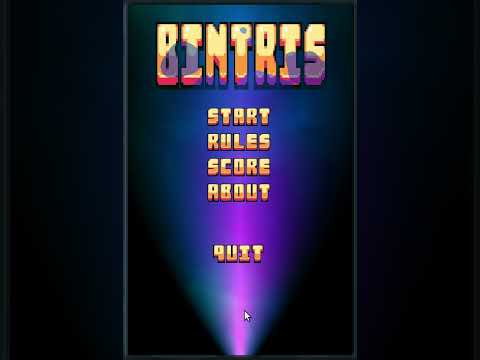 The game is developed in Go and is implemented using OpenGL (graphics) and OpenAL (sound). Gomobile is used to generate shared libraries that are used for the Android build. The game works just as good on Linux as on Android.

It all started as an experiment with Gomobile and ended up as a fully working game, after a lot of frustration and gotchas! ;) With that said, the source is a bit of a mess and I have some stuff on my todo-list such as implementing full parsing of wav header, a simple FSM for the game etc.

To just run the game on Linux, just issue the commands:

First make sure you have built OpenAL (make openal). It's a bit complicated to make the OpenAL build work succesfully with current state of gomobile. I've added some notes below about this.

The repository includes a very small Android Studio project that is used to build AAB package format for Google PlayStore. This project handles AAB packaging and uses the shared objects (.so) files from the build.

To build/run via Android Studio (make sure to have OpenAL libraries first make openal, see requirements below):

Update toolchain.cmake to use -O3 -s to build smaller version of OpenAL (otherwise you will end up with ~30MB debug none stripped version) Also update to armv8 (line 578) in the toolchain from v7.

Using AAB packaging for PlayStore requires libraries loaded with dlopen to not use the path. Hence, the audio/al packages requires to just use dlopen("libopenal.so"). The base.apk in aab doesn't include the libraries rather they are included in the split_config.<arch>.apk.

AL/openal.h etc requires to be in audio/al package dir for rebuilding:

Too see what is included in the divided apk's.